Stories behind art are fascinating. Artists use their brushes, paint, canvases, and tools to create stories like writers use a pen and paper. Here artists reveal the inspiration behind their masterpieces. It’s a rare opportunity to not guess but hear how the work was born, first hand.

One Artist. One Story

Rose Marie Prins’ mixed-media paintings and sculptures have been featured in solo and group exhibitions in museums, cultural centers and galleries throughout the United States, including the San Francisco Museum of Modern Art; the Jonson Gallery at the University of New Mexico in Albuquerque, the Bayly Art Museum at the University of Virginia in Charlottesville; the Polk Museum of Art in Lakeland, Florida; the Gulf Coast Museum in Largo, Florida; the Center for Contemporary Arts in Santa Fe; the Bridge for Emerging Contemporary Art in New Orleans; Aljira, a Center for Contemporary Art in Newark, New Jersey; the Virginia Center for the Creative Arts in Sweet Briar and at Moulin à Nef, Auvillar, France; the Erector Square Gallery in New Haven, Connecticut; the Bridge Street Gallery in Big Fork Montana; the Courtyard Gallery in Alameda, California; the Merlin Gallery in San Francisco; the Woman’s Building in Los Angeles and the Johannesburg Art Gallery in South Africa. 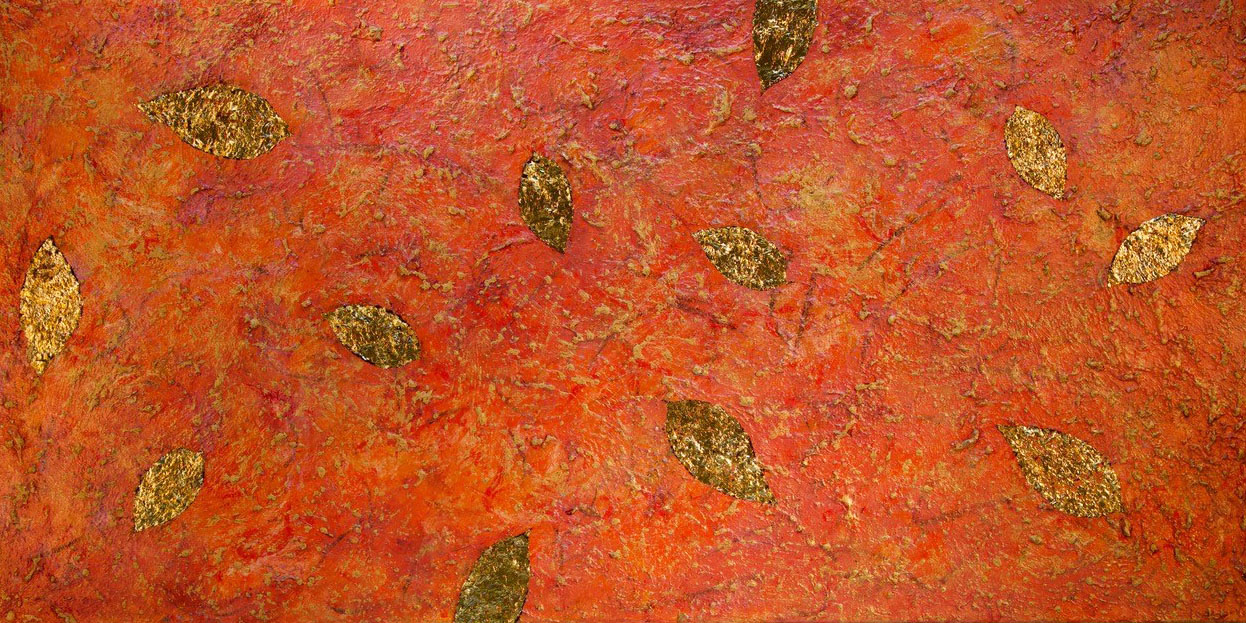 “A few days after I learned that my son, Jaro Majer, had passed away suddenly, I started work on Meditation for Hari. First, inspired by Jaro’s love of graffiti, I made graffiti-like marks on the canvas with charcoal. Then I added the colors of the robes of a swami of the Sarasvati order, blending saffron with orange, adding layers to create a textured surface. Jaro (or Hari as he was called in his spiritual community) had, at times during his short life, aspired to become a swami or monk.

The leaf silhouettes came later after a trip to India. In 2016 I received a grant from Creative Pinellas. Here’s what I wrote in the book A Leaf in the Wind, with Jaro’s poems and my watercolor and Sumi ink images, published in July:

Upon learning of the award I planned a trip to an artists’ retreat in India, my expenses to be covered by the grant monies. I had, for many years, longed to go to India. Like Jaro I love so much of what India has given to the world, including its unique culture, its delicious cuisine and, most of all, the spiritual path of yoga in its many forms.

Shortly after my arrival at the Sanskriti Kendra I took a late evening walk through the retreat grounds. Suddenly, I was struck by the sight of a lone, bright pink lotus blossom emerging from the dark depths of a pond. In the receding light of day, with the first stars appearing in the sky, the bloom glowed as if lighted from within. At this time, three months after Jaro’s passing, my grief was profound. The sight of the glowing, pink bloom was a sign of hope and promise; I experienced an epiphany.

After this, I viewed not just the lotus but all the trees on the property as models for a way of being in the world—they thrived in spite of the drought and New Delhi’s suffocating smog that engulfed them daily. I abandoned my original plan for an art project and started collecting, identifying, and cataloging the leaves on the property. The names of the trees, such as Krishna’s Buttercup, Bodhi Tree, Devil’s Tree and Tree of Sadness, were inspirational…

Before leaving India, I lovingly pressed the leaves between the pages of a magazine, saving them for the next phase of the project.

Since then the project has undergone several iterations. While at a retreat in Mexico, I experimented, on colorful watercolor grounds, with tracings and collages of the Indian leaves. Later, during residencies at the Virginia Center for the Creative Arts and at VCCA’s Moulin à Nef in Auvillar, France, I added the Indian leaf silhouettes that are included in A Leaf in the Wind. In late 2019, after my return to Florida, I used the actual leaves to make collagraphed prints on textured, golden ink grounds.

During this time I experimented with adding collagraphed prints in black intaglio ink to two paintings, one of which was Meditation for Hari. Early this year I added variegated gold leaf—hiding the dark color of mourning with celebratory gold colors symbolizing victory over grief. Thus the leaves, collected in India almost four years ago, have become an essential and transformative aspect of my grief therapy. I will hold my love for my son in my heart forever while knowing, too, that he’s moved on to a better place.”

VISIT ONE ARTIST ONE STORY GALLERY
MORE ABOUT THE ARTIST