Imagine an art show with multiple artists who did the same style, medium and used the same colors. After two or three displays, the yawn factor would hit 10. Art is communication. Color has meaning and temperature. How shapes are organized, and which are selected, sparking iconological interpretations, conjure hidden messages. Now, refine those shapes into beings, objects and time, using the full spectrum of color, and, well, what it says is left to the hundreds or thousands of people who view it from their own perspective. 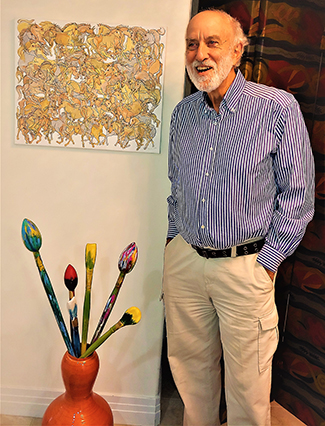 This is what makes Dr. José Rodeiro’s work a delight to see. The complexities in story, all the moving parts presage implied motion animated by vibrant or nocturnal colors used to paint a fantasy that takes the viewer on cerebral trips to destinations unknown.

But how did a young boy from Ybor City, transplanted to Davis Island, morph into a creative genius? Let’s meet José and walk in his shoes.

Most typical three-year olds are stimulated by color and shapes; but few know what to do with them. José was not your typical three-year old. His brain processed differently. Drawing came naturally to him. Even when playing with color blocks, colorful action figures and toy soldiers, with the floor being a blank canvas (as renowned painter, Malcolm Morley, and future friend and colleague of José’s, would state) the arrangement was thought through – like a 3D painting.

At age six (6), José was enrolled in Sacred Heart Academy. His first-grade teacher saw that he was gifted and encouraged José’s parents to nurture his nascent talent, and his formal art education had begun.

During this period, José’s mother serendipitously hung reproductions of renowned female artists all over his home. Being surrounded by works from French artists, Elizabeth Vigee-Lebrun, Marie-Denise Villers and Rosa Bonheur, further influenced his young creative mind. It’s amazing what we think is NOT affecting us, until it’s needed.

This led to the former Tampa Bay Art Center in Tampa, Florida; the Art Dept. at The University of Tampa, Tampa, Florida; Graduate Fine Arts Program at Pratt Institute in New York City, and The College of Fine Arts, Ohio University in Athens, Ohio (where he received his doctorate) – studying painting and art history, with interests in poetry and literature. His favorite medium being oils, but also excelling in acrylic, watercolor, ink, gouache and enamels.

As the late Jim Rohn, business philosopher, author and NSA public speaker, would say (and I paraphrase)…

“…our philosophy is comprised of taking everything you’ve ever learned and getting rid of the useless stuff. It gives you a deeper bucket of wisdom to reach into when making decisions in life.”

The studying of the old masters’ techniques, perspective, color and so on, complemented by literature, history and poetry gave José a dynamic bucket to dip into in the creative process. The works born from the influences of romance, rhetoric, historical lessons and words, influenced by his surroundings, experiences, love and life spawned vivid creations that require a visual study to take it all in.

Imagine filling your bucket from the buckets of such notable artists, philosophers, poets and historians as:

The end result is an artist with a passionate story to share through color, strokes, imagery and through his spectacular Neo-Shamanic Primordial Art anchored in Amnesis Theory.

The Fruits of His Labor

This led to José becoming a Visual Artist Fellow in Painting from the National Endowment for the Arts; and a recipient of a Fulbright Scholarship in painting, which he completed at the University of Central America (UCA), Managua, Nicaragua), as well as a recipient of a Cintas Fellowship in painting. And eventually, becoming Professor of Visual Arts at New Jersey City University, Jersey City, New Jersey.

On November 9, 2019, you will be able to enjoy José Rodeiro’s work at the Gilbert Chapel Gallery at 212 3rd Street N, in beautiful downtown St. Petersburg. Invite your friends and family to what promises to be the show that will cap the creative year for St. Petersburg, Florida and Tampa Bay.