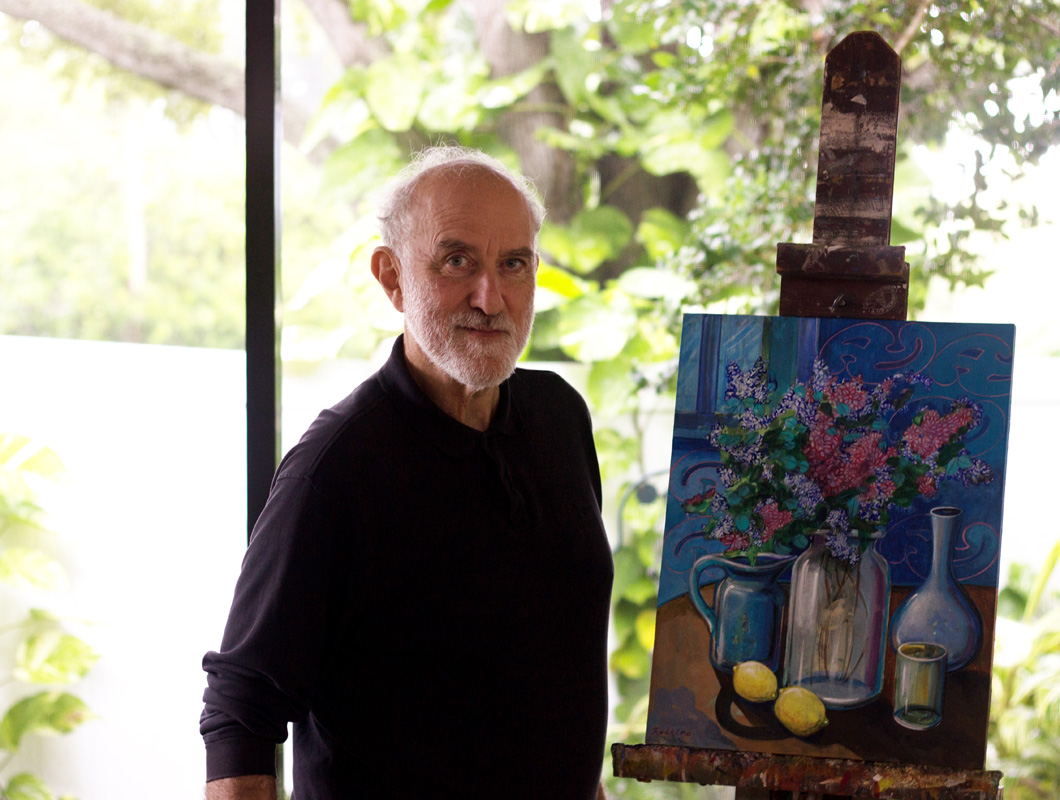 José Rodeiro is a Visual Artist’s Fellow in Painting from the National Endowment for the Arts; and a recipient of a Fulbright Scholarship in Painting, which he completed at the University of Central America (UCA), Managua, Nicaragua), as well as a recipient of a Cintas Fellowship in painting.

He received his M.F.A from Pratt Institute, NY and his Ph.D. from Ohio University’s College of Fine Arts. He obtained his undergraduate degree from the University of Tampa. He is a graduate of Jesuit High School, Tampa, Florida.  He has lived and worked in Spain, Central America, and Latin America.

And, he worked in Barcelona, Spain, from 1985-1986, during his Visual Artist Fellowship in Painting from the National Endowment for the Arts, [(Washington, DC)].

Like Milton Glaser, I tend to work in several styles simultaneously, with set themes of cats, people, landscapes, bodegones (Still-life images), and wild-horses.

Each theme requires a specific artist statement.  However, for our purposes, I will write an “Artist Statement” about my horse painting series, which (for me) exist as “Beach Improvisations,” arising from innate intuitive visions, concerning animistic perceptions about how nature perceives itself.   My horse images are painted in blues.  And, they express creative inspirations echoing Henrí Bergson’s concept of primal élan vital with its veritable Primordialism (or Neo-Shamanism).  Also, inspiring my horse imagery is a peculiar artistic morphogenesis wherein enigmatic forgotten shapes, springing from what Dr. Nicomedes Suarez-Arauz calls “Amnesis artistic lacunae,” wherein mental images house a lost immanent labyrinthic Amnesis mental cave whose ‘cave-walls’ are furtively covered (or decked) with nearly-vanished animistic, shamanic, elemental or atavistic images.  These Amnesis “lost object” are artistically transposed from my immanent mind into “the viewer’s” sensate transcendental realm by flatly applying an array of sublime chromatic hues (burnt violets, icy blues, rosy pinks, and burnt orange) as distinct organic or abstract morphogenic shapes that are painted with pigments on a flat surface, transmitting my mind’s innate individual intuitive vision(s) into numerous visible shapes, forms, and spaces ‒ resulting in an enigmatic musical and poetic push/pull medley of metaphors, symbols, signs, and surfaces.